Abstract. Verbascum birjandense and V. urumiense are described as new endemic species of Verbascum from eastern and northwestern Iran. It was not possible to assign the samples of these two taxa to any of the known Verbascum species in Iran and adjacent regions. Collating the morphological characters of the samples against the specialized and pertinent literature of the genus led us to propose them as new species. Both belong to section Bothrosperma, subsection Fasciculata.
These new species are morphologically close to V. erianthum and V. songaricum based on some key characteristics, but show some differences in basal leaves shape, pedicel size, the ratio of pedicel to calyx, presence of hairs inside the corolla, and the hair color of the stamen’s filaments.

New Article: Verbascum songaricum subsp. subdecurrens: a new record, typification and the true identity of V. aspinum as a new synonym of V. stachydiforme in the Flora of Iran

Abstract:
Verbascum aspinum is introduced as a new synonym of Verbascum stachydiforme
Verbascum songaricum subsp. subdecurrens (Scrophulariaceae) is reported for the first time from North and Northwest Iran. Distribution maps are provided for Iran.

A new species of Verbascum L. (Scrophulariaceae) from the Gilan province (Iran), based on morphological and molecular evidences.

A new endemic species from north of Iran: Verbascum parsana Sotoodeh, Attar & Civeyrel, sp. nov. is described. Considering the combination of some characteristics like ebracteolate and single flowers, violet hairs on filaments, pedicel size between 3 to 10 mm and stellate-glandular indumentum, the new species is related to Verbascum punalense Boiss. & Buhse, but several differences have been observed between the two species: the shape of the anthers, the petiole of basal leaves, the corolla size and the calyx hairs. We investigate the genetic distance of the new species with close genera using ITS and plastid regions (trnS-G, trnL-F, trnH-psbA and partial matK). The new species showed significant molecular and morphological distance from closely related species. Photos and distribution map are presented.

Dr Weil, in Natural Health, Natural Medicine, recommends tincture of mullein to relieve chest congestion and dry, bronchial coughs. He also states that the plant has no known toxicity. So it is a remedy I feel confident using with my family. Whenever my adolescent daughter gets a cold or flu, it seems to settle in her chest as a cough. This year we have treated the coughs with mullein tincture and the symptoms diminished quickly. Mullein is a beautiful biennial plant that grows wild in the Eastern US. In present-day herbal medicine its primary form is as a tincture. Historically, Native Americans smoked dried mullein and colts foot cigarettes as a remedy for asthma and bronchitis. If used as a tea, it should be well-strained because the small hairs of this fuzzy plant can be irritating. (Source: medicinal-herbs, Henriette Kress, 2005)

The favorite remedy for pulmonary tuberculosis in Ireland throughout recorded history and doubtless long before, known from virtually every part of that country, has been to boil the woolly leaves of Verbascum thapsus in milk, strain the thick,mucilaginous liquid produced by that and then drink it warm, twice daily. So valued has this plant been there both for that and for coughs and colds more generally, sore throats, catarrh, bronchitis and asthma that it was formerly often grown in cottage gardens, sometimes on a considerable scale. Advertisements were placed in newspapers, offering it for sale, and it was available even in the best chemists’ shops in Dublin.

Though species of Verbascum have been used for lung and chest complaints over much of Europe at least since Classical times, very curiously that heavy Irish use is not matched in the records from elsewhere in the British Isles. Such English ones as have been traced are all from the south-east and it would appear not even to have been a member at all of the Welsh
or Scottish folk repertories.

In so far as great mullein has had additional, minor uses, the records are again Irish almost wholly. In unspecified parts of Ulster a decoction has been taken for diarrhoea and, mixed with other herbs, for cramp and for liver and kidney ailments, while a leaf roasted between dock leaves and moistened with spittle has been a treatment for boils. The leaves have also predictably found favour as a poultice: in parts of Ireland for ‘running sores’, in Meath for bee stings99 and in Westmeath for goitre. In Kerry, though, it was the water in which the plant had been boiled that was rubbed into the body to ease doctor-resistant ‘pains’ (a word most often denoting rheumatism in the rural areas of Ireland). (Source: Medicinal plants in folk tradition : an ethnobotany of Britain & Ireland / David E. Allen and Gabrielle Hatfield., 2004)

A new endemic species, Verbascum shahsavarensis, is described from north of Iran. Based on two unique characters of this species, these being two anterior longitudinally obliquely inserted anthers and an ebracteolate pedicel, we compared it to species described by Murbeck in 1933. The new species can be easily distinguished from the other Iranian species by having bi-colored hairs on the stamen filaments and the unique anther and pedicel characters. A distribution map is provided.

The name of new species comes from Shahsavar, the ancient name of Tonekabon, an old coastal city at the Caspian Sea. 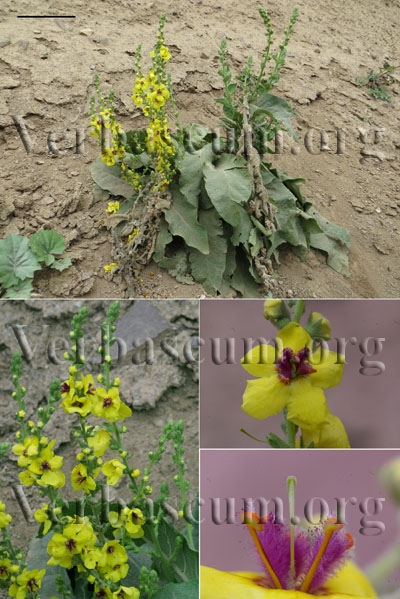 The word Taxonomy was coined by Augustin Pyramus de Candolle in 1813.

Study of relationship and comparing morphological features in search of patterns for grouping organisms into units, groups or Taxa based on similarities and/or differences is classification.

Simpson (1961): Systematics: The study of the kinds and diversity of organisms and any and all relationships among them.

Simpson (1961): Taxonomy: the study of the principles and methods of classification.

In process of classification: for grouping and ranking , we need Taxonomic characters:

Taxonomic characters are those characteristics (feature, aspect) that  are not very variable and/or show no meaningful correlation with other features.

A good character is one that serves adequately to differentiate taxonomic groups, either in a taxonomic key or in some other way. They are usually constant or vary only within defined limits within a taxonomic group and show correlations with other features.

A bad character is one that can not be relied upon for such discrimination. They vary unpredictably within groups and are often environmentally plastic, and show little or no correlation with other features.  (a bad character in one taxon, genus or species may can be a good character in another.

Biogeography: is the study of geographic distribution of plants and animals. it concerns habitation patterns and the factors responsible for variations in distribution.

Category: a particular level (or rank) in the taxonomic hierarchy, such as genus or class. It refers to an abstract level of classification.

Founder event: is the loss of genetic variation that occurs when a new population is established by a very small number of individuals from a larger population

Genus (pl. genera): a category above the species and below family.

Geobotany: is a biological discipline that analyses and classifies the plant communities in their natural environment.

Species: is the basic category in the taxonomic hierarchy. A species is often defined as a group capable of interbreeding and producing fertile offspring.

Subspecies: if the differences of taxa within a species is large, but not large enough to do a specific segregation, then the taxa should be treated as subspecies.

Taxon (pl. taxa): a group with shared features at any rank. (also a particular group of organisms within a category).

Variery (varietas in latin) was the first category to be used below the species level for plants. Linnaeus believed that plant changes by accidental causes due to the climate, soil, heat, winds, … is variety (small differences, in other sources).

Vicariant event: a barrier that cause dividing a population into two and they turn off gene flow. (a climatic change, river, …)

list of Verbascum species in Syria, Palestine and Sinai …