Amplexicaul: Clasping or embracing the stem.

Androgynous: Having male and female flowers in the same inflorescence.

Anther: The pollen-bearing part of the stamen.

Apressed: Closely and flatly pressed against an organ (as hairs on a leaf).

Aril: An appendage or outer covering of a seed.

Aristate: Provided with a stiff bristle. Fig. iii, A.

Axil: Upper angle formed by the union of stem and leaf.

Axillary: Situated in the angle formed by the base of a leaf or petiole and the stem.

Berry: pulpy, indehiscent, few- or many- seeded fruit with no true stone (e.g.tomato).

Bract: A reduced leaf associated with the inflorescence.

Calyx: The whorl of sepals.

Capitate: In a head, aggregated into a compact cluster.

Capsule: A simple, dry fruit formed by the fusion of 2 or more carpels. Fig. v. H.

Carpel: An ovule-bearing unit of a simple ovary in the female flower, 2 or more carpels may be fused to form a compound ovary.

Carpophore: The stalk to which carpels are attached, in Umbelliferae a portion of the receptacle prolonged between the carpels.

Caruncle: A small appendage at or near the point of attachment of a seed.

Catkin: A hanging spike of small flowers, usually with scales between the flowers and often unisexual.

Caudex: The woody base of a perennial plant.

Cauline: Belonging to the stem.

Cladode: A branch or stem simulating a leaf

Coccus: One of the pmts of a lobed fruit with 1- seeded cells.

Corolla: The whorl of petals, often united into a tube.

Corymbose: In a more or less flat-topped inflorescence with the outer flowers opening first.  Fig. vi, B.

Crustaceous: With a hard, brittle texture.

Culm: The jointed stem of grasses and sedges, usually hollow except at the attachment.

Cupule: The cup of fruits such as the acom

Cyathium: The «flower» of Euphorbia consisting of a cup-like involucre containing the small, true flowers.

Cypsela: The single-seeded fi11it of Compositae, derived from an inferior, unilocular ovary.

Decurrent: extending down and fused to the stem or other organ.

Dentate: With sharp teeth at right angles to the margin. Fig. ii, E.

Dioecious: With male and female flowers on separate plants.

Disc-floret: The central, tubular flowers in the heads of some Compositae.

Ellipsoidal: Solid with an elliptical profile.

Endocarp: The inner layer of the fruit wall.

Entire: With a continous margin. Fig. ii, A.

Erose: With an inegularly toothed or eroded margin as if bitten. Fig. ii, K.

Filament: The stalk of a stamen.

Flexuous: Having a wavy zig-zag form.

Glaucous: Covered with a white bloom.

Glomerule: A cluster of heads usually in a common involucre.

Glume: One of a pair of sterile bracts at the base of a grass spikelet.

Hermaphrodyte: With stamens and ovary in the same flower.

Homogamous: With the simultaneous ripening of stamens and styles in the same flower.

Hypogynous: Inserted beneath the female organs.

Indumentum: A hairy or pubescent covering.

Infelior: Below, usually an ovary located below the perianth. Fig. i, B.

Involucre: A whorl of bracts subtending a flower or inflorescence.

Involute: Rolled in from the edges with the upper surface innermost.

Keel: The lower, united petals in a leguminous flower.

Labellum: The lip of an orchid flower.

Lacerate: Irregularly cut at the edge.

Lanceolate: Lance-shaped, tape1ing at both ends with the widest part below the middle. Fig. viii, C.

Lemma: The lower of two bracts enclosing the grass flower.

Linear: long and narrow with the margins more or less parallel. Fig. viii, A.

Lomentaceous: Having the Jiom of a flat legume constricted between the seeds, the legume falling apart at the constrictions when mature to give a number of 1-seeded segments. Fig. v, B.

Medifixed: Of hair fixed in the centre with either end free.

Mericarp: One-seeded part of an ovary split off at maturity. Fig. v, I.

Monoecious: Having separate male and female flowers borne on the same plant.

Oblanceolate: Lanceolate but broadest above the middle. Fig. viii, D.

Palate: A rounded projection on the lower lip of some corollas which closes or almost closes the throat.

Palea: The innermost bract of a grass floret.

Pappus:The various tufts of hairs or scales on the on the apex of Compositae fruits, generally considered to be a modified calyx.

Pedicel: The stalk of a single flower.

Peduncle: The stalk of a flower cluster.

Peltate: With the stalk arising towards the center rather than at the margin (of a leaf). Fig.iii,M.

Pelianth: Collective term for the whorls of petals and sepals.

Peligon: A perianth not differentiated into petals and sepals.

Pinnate: Feather-like, as the leaflets of a compound leaf placed on either side of the rachis. Fig. iv, A, F.

Pinnatifid: Leaf divided ii1 a pinnate way but not cut to the midrib. Fig. iv, D.

Polygamous: With unisexual and bisexual flowers on the same plant.

Procumbent: Trailing, lying flat along the ground without rooting at the nodes.

Raceme: Simple elongated inflorescence with the oldest flower at the base. Fig. vi, A.

Radical: Arising from the root or crown.

Receptacle: The modified apex of a stem bearing the floral parts.

Reticulate: With a netted appearance.

Rugose: With a wrinkled surface.

Runcinate: Coarsely sen-ate with the teeth pointing towards the base.

Saggitate: Arrow-shaped with the lobes pointing towards the base. Fig. iii, I.

Scorpioid: A coiled cluster in which the flowers are usually two-ranked. Fig. vi, G.

Sessile: Without a stalk.

Setaceous: Bristle-like, with a bristle.

Silicula: Dry, dehiscent fruit of a Crucifer, not more than three times as long as broad. Fig. v,F.

Siliqua: Dry, dehiscent fruit of a Crucifer, at least three times as long as broad, with two valves and a papety septum.Fig. v, E.

Sinuate: With a pronmmced wavy margin.

Spadix: Thick, fleshy spike beating sessile flowers at the base and sunounded by a spathe  (Arcaceae).

Spike: An unbranched inflorescence of more or less sessile flowers with the oldest flowers at the base.

Spikelet: A secondary spike or the floral unit in a grass.

Staminode: A sterile stamen which may in some cases be petal-Iike .

Standard: The upper, broad petal of a leguminous flower.

Stipule: The basal appendage of a petiole.

Striate: With fine ridges, grooves or lines of colour.

Strophiole: An appendage at the point of attachment of certain seeds.

Subulate: Awl-shaped, tapering from base to apex.

Superior: Applied to an ovary situated above the perianth. Fig. i, C.

Tendril: A slender, often coiled extension of stem or leaf used for climbing.

Thyrse: A compact panicle in which the flowers of the lateral branches open from the outside inwards.

Trifoliate: Having compound leaves with three leaflets. Fig. iv, B.

Truncate: Ending abruptly, the apex or base more or less straight across. Fig. iii, L.

Tuberculate: With small tubers or lumps on the surface.

Tunicate: Formed of concentric layers like the bulb of an onion, the outer loose coat is often referred to as a tunic.

Umbel: A flat-topped inflorescence charrctetistic of the umbelliferae with the peduncles of more or less equal length and arising from a common point. Fig. vi, F, E.

Valve: One of the segments into which a capsule or pod naturally splits on maturity.

Verticillaster: A whorl-like structure composed of a pair of opposed cymes as in the inflorescence of Labiatae. Fig. vi, F.

Wing: Dry, flat extension of some seeds or stems, the lateral petals of a leguminous flower.

Zygomorphic: irregular or bilaterally symmetrical, divisible into two halves in one plane only. 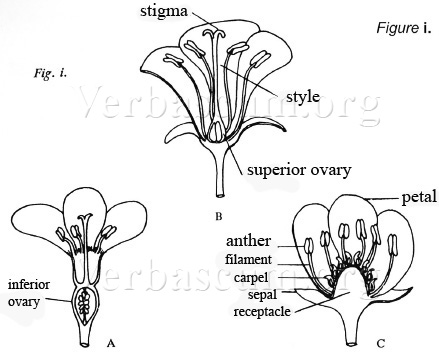 Designed and Developed by: Netbaran.com