Scrophulariaceae is divided to three subfamilies based on corolla lobes and arrangement of leaves:

Verbascum genus is a complex kind, rich species with about 360 species (and many hybrids) in the world, so only the main ones are described. These plants are usually:

These types of hairs can be appear alone or together in one species.

The upper leaves are smaller, simpler in form and sessile and in some species, decurrent on the stem. The stem leaves are usually relatively wider than the other, acute; and for some, narrower and acute.

The hairs on the leaves show significant differences. They can have simple, glandular, branched hairs or glabrous, pubescent or dense tomentose.

Inflorescence: in spikes or panicles.

Flowers: in cymes (rarely reduced to single flowers) in axils of leaf-like or reduced bracts. (the flower size (Diam.) varies from 20 to 55mm)

Stamens: 5 (sometimes 4 fertile and 1 staminode) or 4 (previously it was known as genus Celsia). Filaments are usually villous (white, yellow, purple). 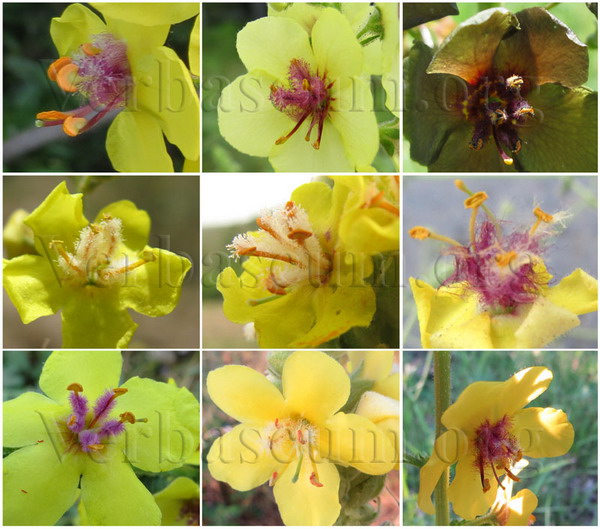 Calyx: with 5 equal lobes, linear-oblong to elliptic or triangular.

Gynoecium: Style filliform or thickened above. Ovary bilocular, generally with many ovules.